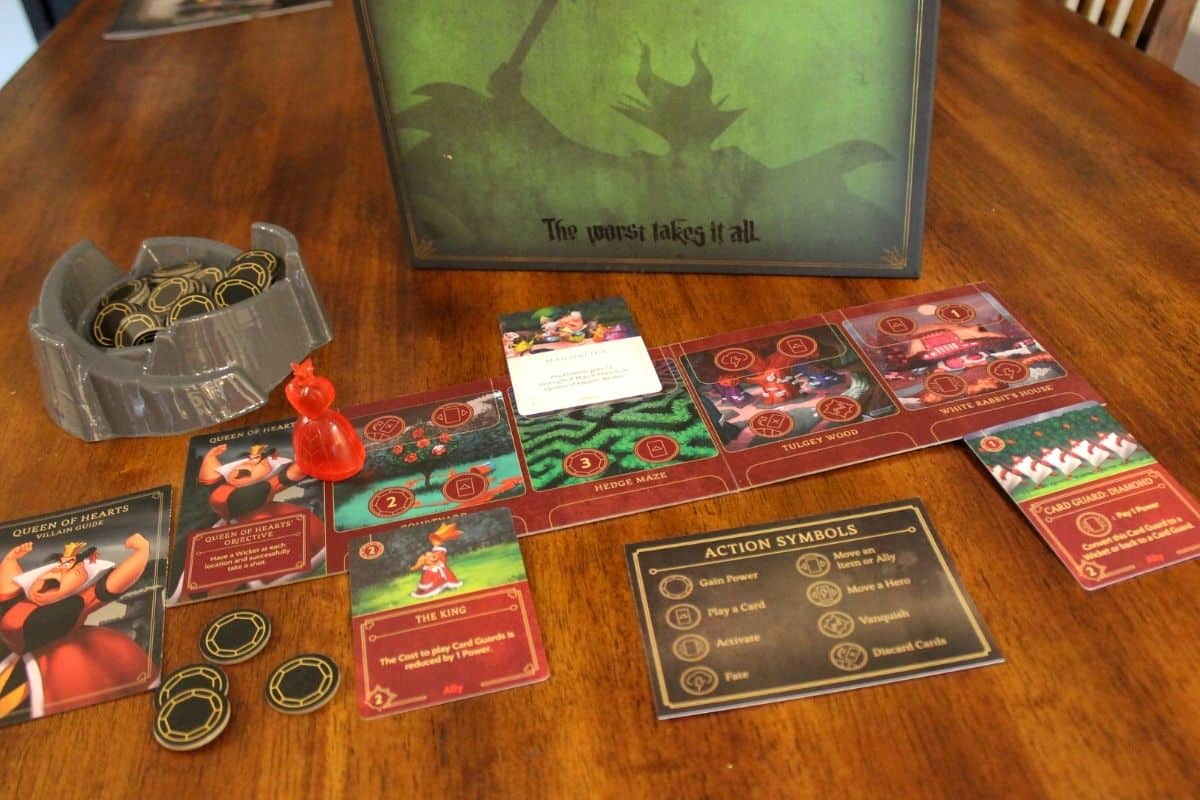 Who doesn’t love Disney? Who doesn’t love villains? Who doesn’t love board games? Ravensburger has taken all three and created one of the most fun board games I have ever played! Villainous allows you to play as an iconic Disney villain from Captain Hook, Prince John, Jafar, Queen of Hearts, Ursula, and even Maleficent to attempt to ruin the plans of another player by playing action cards and utilizing the fate deck. Villainous offers replay value like no other board game I have ever played! Here at Duck Blogs, we reviewed this game and we know it’s one of a kind! This game is also on Amazon to make it quick and easy to get! Click here to get started View on Amazon

Unboxing The Board Game

This asymmetrical board game is built around these iconic Disney villains from classic Disney films. The board game comes with everything to get you and your 5 friends up and started. How the game works is that each particular villain is trying to complete their main objective that is given to you in your own villain guide.

This standalone game is super easy to pick up. You choose a villain either Maleficent, Ursula, Queen of Hearts, Jafar, Prince John, or Captain Hook. Then each villain gets their own villain deck, fate deck, player board, villain mover, and a villain guide to teach you how to play your villain. The villain deck is the deck of cards you will be spending power tokens on to play to get closer to your end game. You start off your move by moving your villain anywhere on the player board, and complete icons on that space if you want. You can gain power tokens, play cards from your villain deck, play fate cards against other players from their fate deck to slow them down, move alleys and/or heroes to an adjacent location on the board, and activate cards to activate their power. This is a unique game compared to other board games in the same category.

Everyone starts somewhere and with this guide I will show you the basics of each particular villain to get that edge over your opponents in the board game.

Captain Hook relies on the fate deck as his objective is to defeat Peter Pan at the Jolly Roger. Since you rely on your fate deck Captain Hook’s villain deck contains cards to allow you to play, discard and find cards in your own fate deck. These cards are really helpful to complete your objective. At the start of the game, Hangman’s Tree is locked which you will need to unlock as soon as possible. Once you unlock Hangman’s Tree you can then find Peter Pan and place him here. In your next turn, you can move Peter Pan to Jolly Roger to get ready to defeat him. Keep playing Ally cards until you have enough strength to defeat Peter Pan and win the game. Captain Hook is a really nice touch and I just love playing as him.

Jafar takes advantage by turning heroes into his own allies with special cards in his villain deck. His whole objective is to get the Magic Lamp at Sultan’s Palace and get the Genie under your control. This could be done pretty swiftly if none of the opponents fate you. Jafar’s playing cards are useful in getting you that quick win since all you really need is 3 cards, the scarab pendant, the magic lamp, and hypnotize. These cards can easily be found with extra abilities that Jafar has up his sleeve. Overall Jafar is one of the easiest villains to win in this base game.

This Disney villain is obsessed with spreading your evil magic around the kingdom. Maleficent’s objective is to start her turn with a curse at each location. Curses are unique to the villain. They come in the villain deck and are easily acquired, it’s just getting them out while other opponents are facing you. At the start, I would try to get as many allies out as possible to counterattack fate cards. Raven is a powerful ally just like in the movie. To protect him as much as possible since he can help you throughout your time playing.

The Queen of Hearts just loves her croquet, so much that it’s in this board game. Queen of Hearts is one of the easier villains to win in the base game. Her objective is to have a Wicket at each location and successfully take a shot. Card Guards need to be transformed into a Wicket at each location. When you do transform them turn them on their side to indicate that you are finished. To take a shot, play the card and turn over the top 5 cards in your villain deck and if the total cost of them is lower than the combined strength of your Wickets, then you successfully made the shot and the game ends with you winning. Queen of Hearts fate deck is alright. They aren’t the biggest threat out there which is why she is super easy to play. Overall I like playing her as she is unique from other Disney villains in this board game.

Prince John is from Disney’s Robin Hood movie and is obsessed with jewels and money. It’s the same in Disney villainous. Your objective as Prince John is to start your turn with 20 power, might seem easy enough but the fate deck is quite difficult to work around here. Robin Hood and King Richard are really the only heroes in the fate deck that can stop you from getting power. So you want to get rid of these heroes as soon as they appear. Some heroes are better to keep around with cards like Beautiful and Lovely Taxes, so it might be beneficial to keep at least some around. Prince John isn’t as tough as some of the other villains in Disney Villainous but fate cards are always tough to get around.

To start off Ursula isn’t a bad villain to play, she’s just not my favorite. She is a sea witch from Disney’s The Little Mermaid. She is mostly reliant on luck since she needs the Trident and the Crown at Ursula’s lair. Ursula only has one ally so she relies on vanquishing heroes by using what is unique to her, Binding Contracts. Binding Contracts doesn’t defeat the heroes but simply moves them to a specific location in her realm. The fate cards for her are tough as they will help in slowing her down as much as possible. You can win with Ursula, just takes longer and more luck on your side.

This board game has a lot of expansion packs that you can even include in the base game. They come each with a set of villains more unique than the last. There is a total of five different Disney villainous expansions from the base game. Two Marvel-themed ones and a Star Wars version coming out soon. The Disney ones consist of Wicked to the Core which includes The Evil Queen, Hades, and Dr. Facilier. Evil Comes Prepared includes Scar, Yzma, and Ratigan. Perfectly Wretched includes Cruella De Vil, Mother Gothel, and Pete. Despicable Plots has Gaston, The Horned King, and Lady Tremaine. Bigger and Badder were the first expansions to include Pixar villains they consist of Syndrome, Lotso, and Madam Mim.

We here at Duck Blogs are big Disney fans and a big fan of board games, so we had to at least try this awesome board game. It definitely blew us away with how well it turned out in art design, character design, and gameplay mechanics. This great game is good for all types of board gamers out there. This can be a two-player game or a 7 to 8 player game with how many expansion packs you have. Our final thoughts on this board game are to give it a try and it might surprise you in the end. Get it here on Amazon